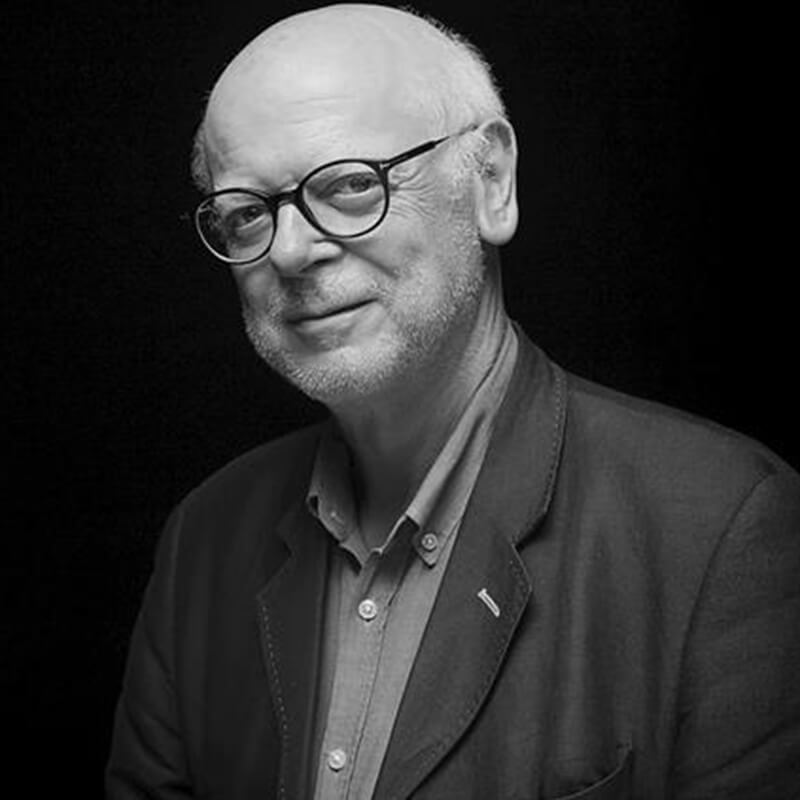 Paul Hyett reflects on IT’s distortion of time, interval and distance. Can design benefit from its impact?

The Old Rules: Where and What?

Since time immemorial, technology has had a huge impact on the where and the what of architecture and building. From the earliest days of urban settlement, beyond any Stone Age decision to bunch a few dwellings around a space for market and trade, the where of town and building location has always been dictated by issues of accessibility.

This was very much the case in England. Early internal trade depended heavily on shipping. For centuries, sturdy little craft braved the coastlines, especially down the country’s east side, before plying their way up the estuaries and rivers as far as their draught depths would permit. Thereafter, further haulage relied on horses (or oxen) and carts. The Ouse and mighty Trent at Hull, and the Thames out of London, were the key river routes inland from the east, and the Severn, Avon and Mersey offered access from the west.

As the Industrial Revolution advanced, the cost of shifting raw materials and finished goods became evermore critical. Transferring loads to wheeled transport only exacerbated expense, so a series of brave, complex civil engineering projects involving systems of weirs and locks were undertaken. These were designed to ensure sufficient depths and enable water navigation farther up riverways and deeper inland, for example to Nottingham and beyond.

Such initiatives were complemented by an intense parallel programme of canal construction. At its peak, this campaign extended over 4,000 miles, linking rivers and positively impacting trade and manufacturing while connecting growing towns and cities across the country. Emerging industrial settlements expanded along navigable waterways.

In the 19th century, newly invented railways scythed their ways through fast-growing suburbs, improved supply lines of raw materials and components, and serviced outward markets. What was their impact? Even greater influence on the where and the what of building across our towns and cities.

When oil replaced coal and straw as the power source, new tarmacadam roads came into their own. Once again, building typologies and location were influenced by innovations in transportation methods, always in pursuit of speedier door-to-door journey times, and for freight-goods, minimal double handling.

The principal generator of these changes was economics: A dollar invested in a product must be returned, with interest, at the earliest possible time. Nothing has changed; newly made goods cannot be allowed to accumulate interest debts and erode profits during a slow journey to market.

As a result, the where of township growth, if not the origins, was always determined by the technologies and reaches of available transport. In America, the form of urban design (or lack of it) was dictated by the available space (usually more in the U.S. than in the U.K.) and by the internal combustion engine; the impacts of emerging transport technologies drove development.

To complement all this, construction technologies emerged in the latter half of the 19th century that enabled even denser city centres. These were:

Clearly, the impact of technology was profound, causing a complete inversion of social hierarchies. From the Romans through to Haussmann’s Paris and Edwardian London, the cheapest rentals had always been at the top of buildings otherwise inaccessible except by stairs. This established hierarchy was quickly reversed as elevators and escalators offered effortless vertical mobility and created optimum values for the now newly desirable penthouses with views!

Occasional efforts were made to blunt the powers of market economies on location, but with little effect. One of the most heroic was the modernist Brynmawr rubber factory, designed against a progressive social agenda to provide local employment up in the mountains of South Wales after World War ll.

But the costs of hauling raw materials up, and finished goods down, the narrow winding roads proved prohibitive and Brynmawr, with its generous clinics, creche, canteens and classrooms, was closed. In the meantime, Wolfsburg triumphed in its efficiency as a manufacturing base for the Volkswagen Beetle and dispatched German exports via Hamburg, while other U.K. locations, such as Derby and Linwood, also proved too expensive as manufacturing bases for the U.K.’s export markets.

As ever, the long shadow of basic economics impacted the what and the where of architecture and urban design.

But today the basic rules have changed again as a new technology has emerged, previously inconceivable even in the mind of Mary Shelley and her fellow science fiction novelists of the 19th century. This new technology continues to evolve and make its full impact felt. It is now beyond doubt that its influence will exceed that of all previous transport and building innovations combined.

Its impact is twofold: it “shrinks” distance (reducing demands for movement and transport) and reduces space requirements and therefore demand for volume and new building.

This powerful new force is, of course, the “wireless” transmission of sound, images and data. Consider these time and distance comparisons:

When John Adam travelled eastward from the Chesapeake Bay in 1778 as envoy to George Washington, it took him and his son John Quincy some seven weeks of sailing to get to France.

In 1866, a mere 88 years later, as described in Simon Winchester’s wonderful book “Atlantic,” the British ship Great Eastern laid the first permanent telegraph line across the Atlantic Ocean. Courtesy of the brilliance and determination of Cyrus West Field, the adverse impact of distance on communication had been largely curtailed.

Fast-forward to the 1950s. Sports fans could by then watch the Australian Open tennis tournament at their local cinemas. Technology had distorted distance. Spectators no longer had to be there to see the event unfold. The “exchange” was one-way and limited, but conventional interaction with fellow spectators had been forever dislocated by technology’s newfound capacity to transmit experience to remote locations. “Virtual” had commenced its assault on “real.” Hitherto unimagined forms of remote socializing would stream forth as new norms.

Even though there were still significant delays as pre-digital film reels had to be transported and then laboriously copied and distributed to movie houses around the country, the processes continued to accelerate. By the 1960s we could watch sporting events live on our TVs, broadcast directly to our homes (albeit only in black-and-white). In the 1970s good quality colour was affordable, and by the 1990s we could further deconstruct time by recording, “fast-forwarding” and replaying our favorite sporting events all on our own device. Two decades later, we could even “deposit” information on the “cloud” — a shared global storage network.

Against today’s norms, those were the “Dark Ages” of information technology. More recent evolutions have since transformed every aspect of our working and personal lifestyles and interactions. The rate of progress has been exponential. We now take for granted the experience of riding “live” in Lewis Hamilton’s Mercedes Maclaren or partaking in an outpouring of shared grief during our late beloved Queen Elizabeth’s funeral from as far afield as Auckland and Soweto in the southern hemisphere to Montreal and Balmoral in the north. We also take it for granted, in international businesses, that we can dial into conference calls or workshop sessions, one after another, and again shrink time courtesy of videoconferencing software, such as Microsoft Teams or Zoom.

It is clear after only a few millennia of scientific and technological progress, our species has effectively conquered the limits distance had hitherto imposed on communication. The world has shrunk in real terms as we quickly morph into an age of augmented and virtual realities and immersive experience. One might say, “Honey, we’ve shrunk the world!”

But what will be the impact of the IT revolution on the where and what of building?

To start, the need for local and long-distance business travel has been slashed overnight. That is a game-changing development with extraordinary impact for the what and where of our building programmes. Since COVID-19 accelerated the effectiveness of virtual exchange, I have been participating in online conferences, meetings and workshops, as well as design reviews and joint design charettes with delegates from around the world on a regular basis.

At the international scale, such practices have saved millions of tons of aviation fuel. The all-time high for aviation fuel consumption was 2019’s use of 95 billion gallons. The COVID years saw that same rate fall to 52 billion gallons. Increasingly sophisticated and available IT will enable us to reduce those levels further.

As we search for solutions, the IT and communication revolution provides our best hope for saving the planet. We have the technology. Now, in the words of the ever-gracious President Barack Obama, we need only to “do the right thing!” And as President Ronald Reagan, that most genial of American presidents liked to say, “You ain’t seen nothing yet.”

So, buckle up for the ride. It’s time for designers and builders to embrace these powers and employ others creatively as we seek greater impact and influence. The world may be smaller, but it desperately needs our help.


Paul Hyett, PPRIBA, is a past president of the Royal Institute of British Architects, co-founder of Vickery-Hyett Architects and a regular contributor to DesignIntelligence. 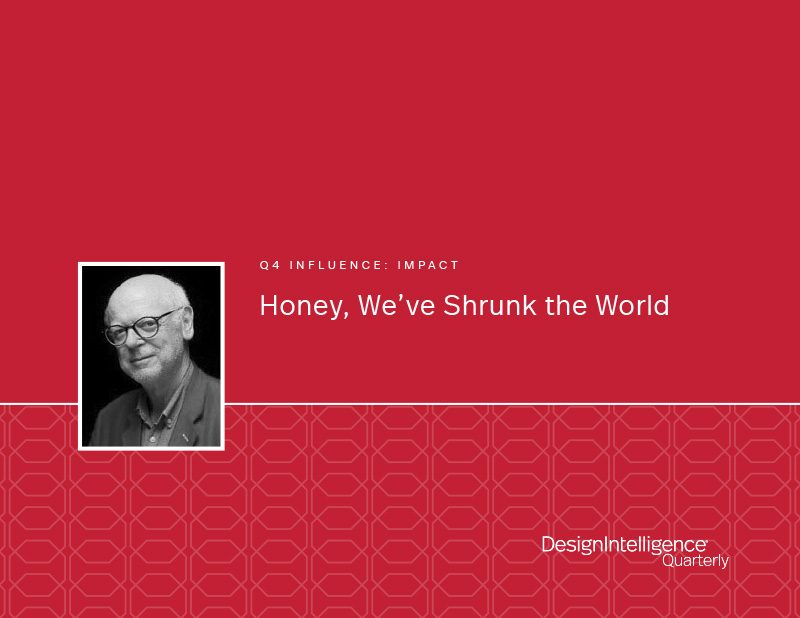