by Jonathan Salk and David Dewane

Nearly 40 years ago, Jonas Salk and his son Jonathan wrote a book about the transition from centuries of population growth to population equilibrium and the impact that such a change would have on society, global interdependence, and the environment and its resources. Recently, Jonathan and David Dewane have updated the book, called “A New Reality,” to examine how all of us can have a role in ushering in the next epoch. The two men spoke with DesignIntelligence about their adaptation and the continued relevance of population issues in today’s world.


DesignIntelligence (DI): What inspired the two of you to work on a new edition of “A New Reality”?

Jonathan Salk (JS): My father had the basic idea back in the early ‘70s. Later, he was invited to put together a book for the United Nations using their population data. He got behind on it, asked me to help him, and I did. It came out in 1981. It didn’t receive much attention at the time, but my father continued to lecture about the idea until his death in 1995. As time went on, I saw that trends toward sustainability, interdependence, cooperation were coming to pass. I was thinking about reissuing it and then out of the blue, I had a call from David.

David Dewane (DD): In “No More Secondhand God: And Other Writings” by Buckminster Fuller, there’s a passage dedicated to Jonas Salk as a champion of anticipatory design, which is a major interest of mine. Then I was at a Design Futures Council meeting, and Jim Cramer mentioned this book specifically by Jonas Salk. So, I read it, and it crystallized so much of what I had been feeling internally in regard to the cultural, conscious shift toward sustainability; it also put it in a scientific framework that I felt was really validating.

DI: How did the content need to be adapted for today’s audience?

JS: There are changes in text and language and in the overall design. My father’s writing style was elegant but sometimes a little bit complex and turgid. So there is an attempt on my part to make this more accessible to a general reader without oversimplifying it or dumbing it down. The biggest thing however, and I owe this entirely to David, is the visual presentation and design of the book. We worked with a wonderful designer name Courtney Garvin who added a human element: color, redesigned graphics and beautiful photographs.

DD: The higher purpose for designing it this way is the audience has changed. Now the readers of this book will live out one of the most exciting chapters in human history. It’s the lifespan that is going to straddle that inflection point, and I don’t think that was necessarily the audience the first one was written or designed for. We redesigned it in a way that could be read by high school kids or college freshmen. They are the people whose lives are going to be most deeply impacted by this text.

DI: Can you explain the concept of the two major epochs that you describe? 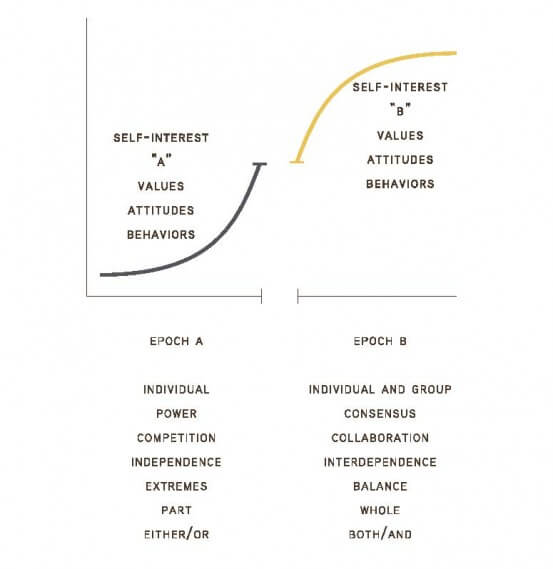 JS: It’s a very visual concept based on an S-shaped growth curve. The basic idea is that, after centuries of accelerating population growth, we are entering a different era. As we do, we need to adapt to different conditions, particularly conditions of limitation and slowing of growth in population. In doing so, there is a necessary and desired shift in values, attitudes and behaviors. It has become clear in the past 30 to 40 years that resources and the ability to dispose of waste that once seemed totally unlimited, are not. We are hitting those limits and need to make adaptations. Those adaptations include going from competition to cooperation, independence to interdependence, constant growth to a state of equilibrium, and going from an “either/or” philosophy to a “both/and” philosophy. Those are the major shifts that happen right around the point of inflection in the population growth curve.

DI: What propels the change between these epochs?

JS: It is a matter of what we as individuals, groups and a species need to do to survive. What conferred advantage when things were accelerating and growing without limit is no longer advantageous. In order to adapt and survive, we necessarily have to make this shift in values.

DD: If you’re a hotel company that shares resources, that suddenly confers far more advantages on that company than a hotel chain that tries to dominate by just acquiring as much real estate as possible. That model of thinking is very Epoch A. Airbnb is a great example of Epoch B thinking. I think the biggest challenge, frankly, is for a lot of companies that were established and enjoyed success in Epoch A to try to reimagine themselves in Epoch B. How do you make a polar change?

DI: What leads you to believe we are at the inflection point between these two epochs?

JS: Objectively, we are at the inflection point in terms of population growth. In addition, we are seeing the difficult process of the emergence of new adaptations in conflict with old ones. There is conflict between increased international cooperation and interdependence and polarizing nationalism. Companies and corporations engage in resource sharing. Climate change is another huge factor; it is clear we are approaching limits to our planet that are going to require behavioral and attitude changes.

DI: When we think about ourselves as a world community, what is our responsibility in bringing about this new epoch?

DD: The population rate is now going down for the first time in human history; there are fewer people that will be born in 2020 than there were in 2019. For 100,000 years, that was not really true in any long-term trending formula. The real number of where population ends is unknown, but the median is around 12 billion. Once it locks in at that number, it is going to be with us for a long time — hundreds of years. A population will basically go into dynamic equilibrium and stabilize at a point. The responsibility of this current generation of designers or policy makers is to try to get that number to come in as low as possible. Then that’s the difference between nine or 10 billion people competing for all the world’s resources versus 16 billion.

JS: There is an urgency now in terms of climate change that didn’t exist 10 or 15 years ago. It’s our responsibility, overall, to take care of the earth and the best way to do that is to take care of the welfare of each living being on that earth. For example, factors that help slow population growth in the developing world, where population increase is the most rapid, are improved socioeconomic conditions, better health care, decrease in infant mortality, and increasing the education of women and their ability to make reproductive decisions themselves. Those factors cause people to have fewer children per family. This is a real win-win solution because it helps the people in those areas live a better life, and overall, it helps in terms of the number of human beings on the earth, which benefits us in the developed world as well.

DI: What role do architects and designers play in this new epoch?

JS: Architects and designers are in a position to look toward the future and figure out entirely new ways of adapting and living our lives in spaces and as communities. Architecture is a huge part of this because architecture, at its heart, is not just about form and structure, but about humans and human interactions.

DD: The challenge for architects is to get over the fact that 21st century-architecture in Epoch B is not simply about the skillful manipulation of form and combining building materials together. Architecture is about giving a body and organization to anything that requires a diagram. It does not have to be physical. Also, 90% of the work that is open to us isn’t necessarily built environment. Don’t wait for a client to come knocking on your door with a project. Be entrepreneurial. Be anticipatory.

DI: What can each of us as individuals do to help with a successful transition into this next epoch?

DD: Zoom your scale back out. Take the individual and then take their entire body of work. You can start to use a very small amount of well-placed energy to move large systems. In that way of thinking, individuals can become extremely powerful. You should not be intimidated by just being one person or one firm.

JS: We need to design new kinds of political, social and economic systems that are based on adapting to the different conditions of Epoch B. In doing so, that involves change in individual lives, at the family and community level, all the way up to the planetary and global. We each can have a role to play in every one of those levels.

Jonathan Salk is co-author with his father, the late Jonas Salk, of “A New Reality: Human Evolution for a Sustainable Future”. A graduate of Stanford University and the USC School of Medicine, he completed specialty training in psychiatry at UCLA David Geffen School of Medicine where he is currently Assistant Clinical Professor. He is in practice in Los Angeles and is a Senior Fellow of the Design Futures Council as well as a member of the advisory board of the Population Media Center.

David Dewane is a journalist, architect, entrepreneur and educator. His background is in ecologically and socially equitable design. David is a Halycon Fellow, has been honored as an Emerging Leader by the Design Futures Council, and was certified as an EVOKE Agent by the World Bank Institute.